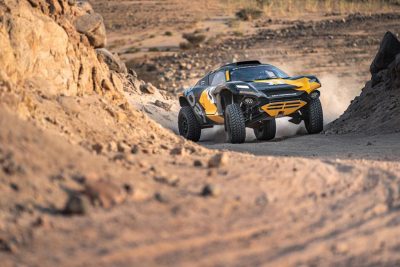 Extreme E, the new electric off-road racing series, begins this weekend with its inaugural race, the Desert X Prix, in the deserts of Al-‘Ula, Saudi Arabia.

The race itself happens on Sunday at 10 a.m. – 12 p.m. UTC (3 a.m. PDT, 6 a.m. EDT, 1 p.m. local Saudi time) and will be streamed to some but not all territories. You can find out how to watch it on Extreme E’s website. In the USA, Fox Sports 1 will carry the final race delayed at 3 p.m. PDT/6 p.m. EDT on Sunday (listings subject to change, check the schedule for timing of other sessions). Other race events, like shakedown and qualifying rounds, will also be streamed on Extreme E’s social media.

Extreme E was founded by Formula E CEO Alejandro Agag on the idea of bringing electric racing to a variety of remote and environmentally fragile locations to raise awareness of climate change.

There will be five races this season, each set against a different environmental background – Desert, Ocean, Arctic, Amazon, and Glacier. Each race is intended to highlight the effects of climate change on their respective environment and how electric transportation can reduce humankind’s carbon footprint.

The first race, in the desert, has an obvious focus – desertification. As global temperatures rise due to climate change, many regions will see more drought and deforestation. Extreme E cites projections that show that if climate change continues unchecked, billions of people will be exposed to periods of water scarcity and up to hundreds of millions will be displaced, increasing climate refugeeism.

Races will also benefit local conservational causes, with this race supporting endangered sea turtle conservation efforts in the Red Sea in association with the Ba’a Foundation.