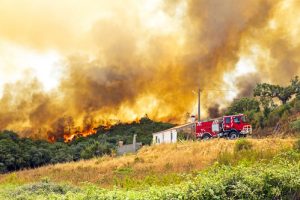 CAMP VERDE, Arizona — The reason for the brush fire near Camp Verde was likely a dragging chain. The brush fire shut down Interstate 17 for hours on Tuesday, Prescott National Forest officials said.

The fire originally started as several brush fires, including the 3-acre Pinto Fire and the 5-acre Copper Fire, just before 2 p.m.

The flames were close to the I-17, and the Arizona Department of Transportation shut down both directions of traffic for hours.

The fires eventually burned into one fire, called the Cooper Fire which has burned 106 acres.

Drivers had only two options, take a long detour, or wait out the closure. “My home’s that way so I’ve gotta wait because they’ve closed all the dirt roads,” said Shawn Berliew.

Berliew bumped into his father Gene at the closure, who was on his way home from work.

Some wondered if they would have to spend the night in their cars. After hours passengers left the place and reached to their homes.

Both directions were partially reopened by 8 p.m. The freeway was fully reopened around 9:45 p.m.