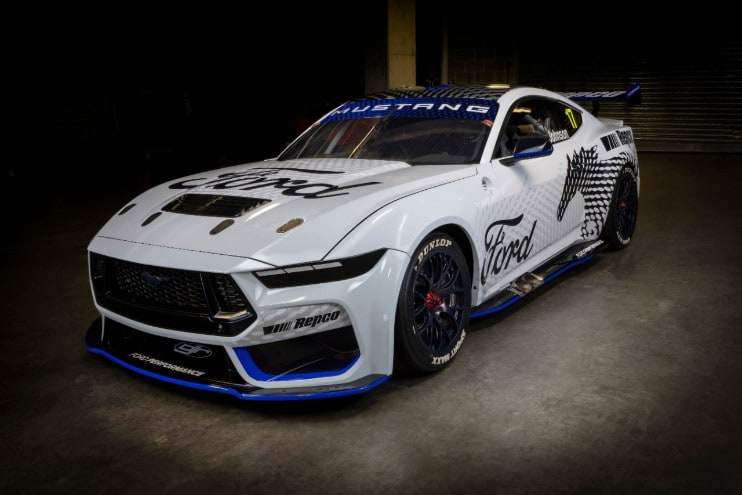 This Ford Mustang is going to run circles around the competition.

The Ford Mustang GT Gen3 is by far the most enticing entry in supercars from the American automaker. Just look at all of the variants that they offer with this new and improved racing masterpiece. The car had been created specifically for race duty, thanks to Dick Johnson Racing and is likely to compete in the 2023 Australian Supercars Championship. A variant of the Ford Mustang GT Gen3 is also looking to participate in the 2024 Daytona 500 as well, according to Ford themselves. It’s al a race to get to the top of the food chain, in the eyes of the racing world.

It’s well-equipped, as you can tell by the race-spec sheet metal, and the huge rear wing. The Gen3 Supercar also comes with 600-plus-horspower of the already existing Mustang GT Coyote 5.0-liter V-8 engine.

Ford has been prepping for this by displaying several race-prepped Mustangs in computer-generated-images. CGI really. And the car is likely to make big waves as it enters in multiple racing series that involve the GT3, the GT4 races, as well as the NASCAR Cup Series and the NHRA. It seems to be that this particular variant however is the first to be seen in speeding color.

It’s not a far cry by any means from the original Mustang GT. As the sheetmetal has been decked, head to toe, in Ford, Mustang and additional graphics. The white paint is paired perfectly with the blue accents it needs to outline bottom edges of the car, while there is no missing giant wing on the rear.

Underneath the hood, the engine features dual air intake-fed dual throttle bodies. It’s not clear yet how fast it can go, but the likelihood is that it will surpass the predecessor’s output of 480 horsepower and 420 pound-feet of torque. Combine those odds and you’ll see beyond 600 horsepower produced in total. With not too many more details to really regale in, there’s much anticipation for the Ford Mustang GT Gen3 supercar as it is to drive onto the Australian scene of this weekend’s Bathurst 1000. Dick Johnson will take the wheel in what is essentially being touted as a parade lap.

But that’s not all, Fords!

Ford Performance themselves confirmed that they have plans to unveil the Mustang GT3 Race Car for the International Motor Sports Association 2024 race season, in the 24 Hours of Daytona. And likely, it will be a wonderful union as Ford Performance joins forces with trusted racing collaborator Multimatic Motorsports. It’s to feature a two-car factory-backed IMSA GTD Pro works team, handled properly by Multimatic, in addition to customer Mustang race cars for the GTD class beginning at Daytona in 2024. With Multimatic’s past experience on the Ford GT Program and the new Bronco DR customer race programs, there’s a high-likelihood that there will be total improvement in the sector as championship-level race programs are provided for Ford and their customers.

There’s a rich history to be had when it comes to Ford participating in the FIA World Rally Championship as they have recently collaborated, developed and prepared the Ford Puma Hybrid Rally1. That of which finished 1-3-5 in the debut race at the Monte Carlo Rally.