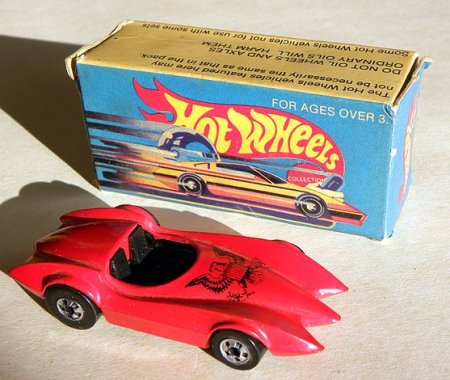 Did you know the most expensive Hot Wheels on the market rival some actual, functional cars? These five- and six-digit collector’s pieces cost more than many life-sized models do!

The Mighty Maverick first zoomed onto the scene in a 1970’s Hot Wheels line-up. It was based on the 1969 Ford Maverick. But the designers had a little fun. So you’ll notice that it’s pretty jazzed up. There are plenty of these in circulation, but only a few with a unique addition: the Mad Maverick baseplate. Copyright infringement limited this run, meaning units are scarce. Experts value this particular model at $15,000.

Collectors speculate there are about 20 of these known to be in existence. It’s the chrome finish that cinches this as a special toy. Once again, that antifreeze-over-chrome look just knows how to catch the eye. The lime green color makes this soft-top seem modern and fun. The listing price? $25,000. That’s right–enough to buy a gently used Camaro that you could actually drive.

We know, we know: we can’t get enough of the chrome! Or rather, the public can’t get enough of the chrome. The specific paint shade of this rare unit is called “Strawberry.” There are exactly two models in the world. Executives hoped to use this, much like the Camaro, for marketing alone. Somehow, it found its way into the hands of a private collector. Oddly enough, that collector lived in a trailer park. But when this car sold at his estate? It went for $40,000.

Ready for the real whopper?

The Pink Rear-Loading Beach Bomb is the most expensive Hot Wheels on this list. There are two pink units in circulation and a handful of other colors. The car turned out to be too top-heavy. And so Mattel released an altered version where the surfboards mounted on the side instead of loading in through the back. They also gave the new version a plastic sunroof. This particular all-metal original sold for $175,000.