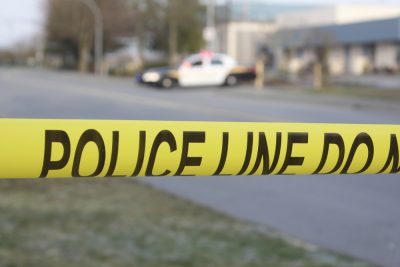 TUCSON – Tucson police are investigating a fatal shooting in the midtown, Thursday night.

According to police, officers responded to reports of two men who were reportedly shot near First Avenue and 10th Street.

According to Tucson Police, two men approached a couple at Iron Horse Park near the Snake Bridge on Broadway Blvd.

The men robbed the couple taking their money and cellphones.

One of the robbers then shot the male victim. Both robbery suspects took off running from the place.

The male victim was taken to the hospital where he died a short time later.

The female victim was not injured.

Several minutes later, police say they received a second report of another shooting a few blocks away near 4th Avenue and 9th Street.

That is where officers found a second shooting victim. Police say he was taken to the hospital and underwent surgery overnight. His condition is not known at this time.

Police are looking for the two robbers. Suspect one is described as 5’8″ tall, wearing a black baseball cap and blue shirt and weighing 200 pounds.

Suspect two is described as 5’8″ tall, with a skinny build, and was wearing a red bandana.

Police are investigating if the two shooting incidents are connected.

If you have any information, please call 911 or 88-crime.