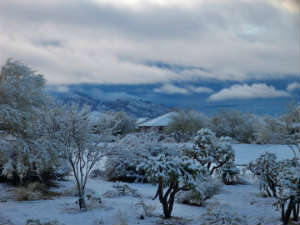 TUCSON, ARIZONA – Snow fell in Tucson this Friday morning and not just in Mount Lemmon. A video captured the rare snowstorm and the Department of Transportation posted it to their website.

As of 10 a.m., the storm produced  0.7 inches of snowfall. Snow coated the downtown streets of Tucson. Consequently, officials shut down the road to Mount Lemmon to everyone but emergency and snow crews.

Local officials say it’s snowing even in lower elevation areas like Marana and Avra Valley. In Mount Lemmon, the visitor center registered a snowfall total exceeding 38 inches. This was verified by the Pima County Sheriff’s Department.

The city closed Eastbound Interstate 10 at milepost 35, outside Benson Transportation officials report several crashes there due to the heavy snowfall. There’s no timetable to the highway’s reopening.

All westbound lanes are open. The Arizona Department of Transportation suggests drivers postpone travel. Particularly in the area of Tucson and Wilcox until the snowfall subsides.

On Interstate 10, specifically between Tucson and Wilcox, the significant snowfall is impairing visibility. Visibility is between half to a quarter mile.

Throughout the region, commuters can anticipate a slick commute. Officials expect a combination of rain, snowfall, and ice. At elevations of 2,500 to 3,000 feet, they predict 1 inch of snow. At higher elevations, they’re forecasting an additional inch.