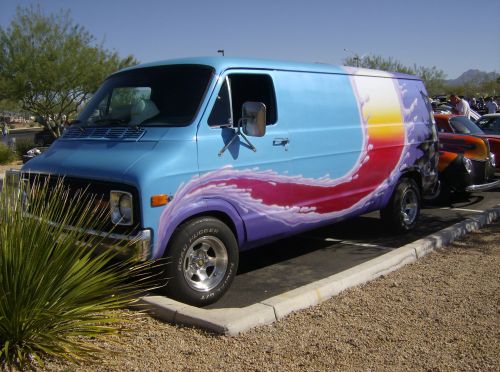 The ’70s Supervan was the most awesome vehicle to exist next to muscle cars. Kick-ass rock and roll, sexy, bra-less women everywhere, and the parties that would never stop. Being a late-teen or early 20-something in the ’70s meant total freedom. I never lived in that time, but I’ve watched “Dazed and Confused” enough to merit my appreciation for it. One of the most awesome vehicles to come out of that time was the Supervan aka the “Shaggin’ Wagon”

The evolution from the ’60s

We all have this notion that the ’60s were a time of freedom. It’s kinda true, but it also sucked. This was the start of “living in your van, cause its, you know, like, cool”. Well, the time of peace-loving hippie got absolutely destroyed when the ’70s came around. Bands like Black Sabbath, Led Zeppelin, and many others came out to represent heavier, faster and more abrasive music. The Supervan was a total embodiment of that.

Imagine putting around in a dopey little VW Bus. It must have sucked going that slow. Instead of having a putter wagon, the Supervan decided to drop a big-block V8 engine in it. Gave it all-wheel drive and put the sickest graphics on the side. The van was for a real man.

Do you want a red van or a blue van? If you had a real pair of tungsten steel cajones, you’d say neither. “I want a gnarly image of a WIZARD summoning LIGHTNING and fighting a DRAGON…ON A CLIFF.” you would probably say to yourself. Well, if you had the most awesome van in the world, you would totally have it. The artwork for these varied, but it all had to do with mythical knights and naked ladies and firebreathing dragons. How much cooler can you get?

Imagine having the coolest room in the world. It would have a shag rug, crazy blacklights and probably a disco ball. Yeah, man, nothing could be cooler. Imagine taking a girl in the back and laying her out on a comfy shag (heh) carpet.

Van’s today are lame. They’ve been neutered from their original glory days to accommodate soccer moms. No more lightning, and especially no more wizards. Gone are the days of having some shredding guitar solo playing in the background every time you opened the door. Oh well, we’ll find other ways to be cool, I guess.