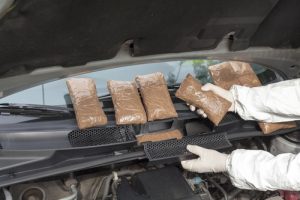 a 28-year-old man has been sent to a deep inspection of his vehicle, Nissan van where Wednesday morning, an agency canine alerted officers to a scent on the rear sliding doors.

More than 12 packages of heroin which were weighing around 20 pounds. Officers estimate the value of the heroin which was $533,000, according to the press release. Also, meth was estimated at $42,000 and two more pounds of cocaine worth over $57,000.

On the afternoon of the same day, a 19-year-old was referred for further inspection at the Morley Pedestrian Crossing. A canine alerted over two pounds of meth being hidden in the woman’s underclothing. The value of the meth was $6,000.

At night of the same day, a 22-year old has been sent for an inspection by the officers. They were inspecting his Honda sedan at the Dennis DeConcini Crossing.

All three suspects of cases have been arrested and turned over to the U.S. Immigration and Customs Enforcement’s Homeland Security Investigations.